Before we reach the southern border of South Dakota, the dark clouds begin to lift. The threat of rain continues, but small holes of blue sky appear.

Finally, we cross the Missouri River into Iowa and continue south through construction zones and more farms. But definitely more civilization, too; a different feel from the serenity offered by the prairies of North and South Dakota.

We cross the bridge at Council Bluffs into Nebraska. When you fly to Omaha, you actually fly into Council Bluffs, which I’ve done many times on business.

Omaha is famous, of course, for hosting the College World Series at Rosenblatt Stadium. I’ve been by the old girl (born in 1947), but never had an opportunity to catch a game there.

The College World Series has a new home. I’ve also been by it during construction. Rosenblatt (and its rich history), unfortunately, is to become an extended parking lot for the Henry Doorly Zoo & Aquarium. Such is progress.

And the Omaha Storm Chasers (formerly the Royals) moved into a new stadium near Papillion. As the sky brightens a bit, Mitch and I pull into the parking lot for today’s 1 PM start. 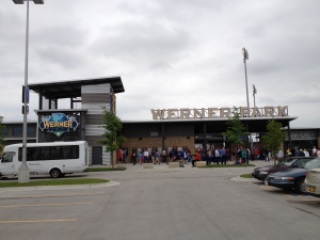 From the lot at Newman Outdoor Field in Fargo to here covers 430-some miles or about 6.5 hours of driving time. But after this game, we need to be back on the road to catch today’s second game at 7, in another city in yet another state.