Following Saturday evening’s 1-0 nail biter at Citi Field, what would be in store for the Harrisburg Senators Fan Club’s first 2015 road trip on Sunday? The Nats had been blanked for eight straight innings; the Mets for nine consecutive. Plus the Mets shut out the Nationals 4-0 Friday night.

Very little scoring, but big time baseball drama this week in Queens. And that’s what we saw by the time we arrived at the ballpark.

We weren’t the only ones arriving late due to the NYC traffic snarls. That meant the game was starting yet security lines were lengthy. Fortunately, folks with children and anyone without a bag could jump the line. However, it didn’t take long for the security line to shrink for the others. (I tip my Senators cap to those burdened by this huge responsibility. They took it in stride and remained pleasant throughout their encounters with fans.)

Once inside I peered onto the field from the open concourse. From the time I settled into my seat, I felt a more intimate ballpark than I’d expected.

Sure, it’s big. But Citi Field is mostly tall. I expected the huge video boards to appear farther back from the outfield fence. The field played smaller than a big stadium should. 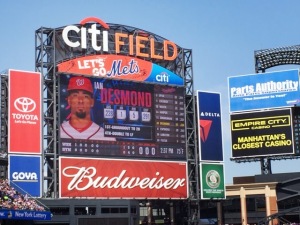 From Section 125 the action easily unfolded before us and 41,000 others. The Shea Bridge provides uniqueness to the outfield backdrop.

The large Citi Field logo is visible both inside and out. Mindy appreciated that the batting team lineup and stats always remain on the left video board; the defense and pitching stats on the right.

On the heels of our last Fan Club trip (Jordan Zimmermann’s no-hitter to close the curtain on the Nats’ 2014 regular season, we witnessed no runs at Citi Field. Ryan Zimmerman’s 1st inning broken bat flare scored the only run of the game.

Not that we minded. Every pitch was meaningful. Both teams had opportunities, pitched extremely well and played good defense. The Nats stranded both 1st & 3rd one inning and bases loaded in another — both with no outs — yet Mets’ pitching miraculously worked out of those jams.

It was good to see the Mets faithful respond to the team’s early 1st place effort. The atmosphere nearly felt like playoffs to me, which added to the excitement.

Of course many former Senators saw action, including three relievers that Matt Williams paraded from the pen following Doug Fister’s stellar 6.1 IP. Tanner Roark got two key outs; Aaron Barrett K’ed the only Met he faced to end the 8th; and, Drew Storen closed the door with a perfect 9th.

A Washington team hadn’t won two straight 1-0 games since “Senators” displayed across their jerseys. However this game had turned, it was bound to be a classic, especially on the heels of the previous night’s 1-0 contest.